Did Jesus and Isaiah PROPHESY the coming of MUHAMMAD?

To understand the prophecies made by Jesus on the subject, one has to begin with the First Epistle of John, Chapter 2, Verse 1. Here, Jesus Christ is called a "Paraclete" (Parakletos, Advocate, Comforter, Helper) by apostle John. The same term "Paraclete" is used by the apostle in his Gospel, in connection with a portentous prophecy made by Jesus Christ, before the end of his ministry upon this earth, for the coming of "another Paraclete". Prophet Moses also made a similar prophecy, before the end of his ministry, for the coming of his successor. Jesus Christ declared;

"And I will pray the Father, and He will give you another Paraclete, that he may abide with you into the age (to come)."
John 14:16

Note: We often read the verse ending as; "with you for ever". However; "into the age" is the literal translation of the Greek phrase; `eis ton aiona', used by John.

These two verses by John clearly demonstrate that Jesus Christ, while speaking of "another Paraclete", was speaking of the coming of "another male figure" like himself, some time in the future, after his departure. The passage quoted below also confirms that the original concept among the noted Christian scholars and populace, for the "Paraclete" was for the coming of a "male figure", but that concept was later confused with the "Holy Spirit". Here is an extract from the world renowned and distinguished Anchor Bible Volume 29A:

"The word parakletos is peculiar in the NT to the Johnannine literature. In 1John ii1 Jesus is a parakletos (not a title), serving as a heavenly intercessor with the Father. ...Christian tradition has identified this figure (Paraclete) as the Holy Spirit, but scholars like Spitta, Delafosse, Windisch, Sasse, Butlmann and Betz have doubted whether this identification is true to the original picture and have suggested that the Paraclete was once an independent salvific figure, later confused with the Holy Spirit." (page 1135).

The Bible tells us that Jesus Christ, besides being a "Messiah" was also a prophet like Moses, by his own admission. Please see John 5:46 and 9:17. Hence to say that the coming of "another Paraclete" was similar to the coming of "another Prophet" like Jesus and Moses, would not be inaccurate. OTOH, the concept of "Holy Spirit" is unequivocally negated by the following verse:

"But I tell you the truth, it is to your advantage that I go away; for if I do not go away, the Paraclete shall not come to you; but if I go, I will send him to you." John 16:7

This verse clearly tells us that the coming of the Paraclete was subject to the departure of Jesus. Whereas, the "Holy Spirit" was already present. It was in existence since the day of the Creation and was hovering upon the surface of the earth (Genesis 1:2). It was also present with the prophets of the Old Testament. The "Holy Spirit" happened to be present at River Jordan when Jesus Christ was being Baptised by John the Baptist, in the early part of his ministry. So, how could Jesus say; "but if I go, I will send Holy Spirit"?

This above verse clears the confusion. The Paraclete is called the "Spirit of Truth" and not the "Holy Spirit". These are two separate terms and two independent entities. The first takes the pronoun "he" being a male figure, whereas, the second one takes the pronoun "it".

"But the Paraclete, the Spirit, whom the Father will send in my name, he will teach you all things, and bring to your remembrance all that I said to you." John 14:26

2. The word spirit, Greek. `pneu'ma', is of neutral gender and takes pronoun "it". Whereas, in almost all the verses referring to Paraclete quoted above and below, the pronoun used is "he".

4. History records that prophet Muhammad was known for his Truth and Honesty, long before he received the Revelations.

Jesus Christ did indicate what the Paraclete to come will do in his time. Did prophet Muhammad do those things? Let's examine;

1. "But when he, the Spirit of Truth, comes, he will guide you into all the truth; for he will not speak on his own initiative, but whatever he hears, he will speak..." Jn.16:13

Note: The Quran is a compilation of the "Divine Revelations" that were received by prophet Muhammad, over a period of 23 years, through the arch angel Gabriel. The prophet used to recite whatever he used to hear. Prophet's companions used to write down whatever was recited. The Quran does not contain the writings or teachings of or by Muhammad, as often mentioned by some misinformed authors.

Note: The Quran glorifies the birth of Jesus through Virgin Mary. The Quran also confirms, Jesus was a Messiah; a Messenger of God; the Spirit from God; the Word of God and the Righteous Prophet.

Note: Muhammad did declare himself a Messenger of God like Abraham, Moses and Jesus.

Note: The Quran teaches a way of life. It guides mankind, how to live a pious life socially, politically and spiritually.

Note: The Quran speaks about the teaching of the righteous Jesus and even quotes him.

Prophet Isaiah is considered to be one of the major prophets of the Old Testament. In the Book of Isaiah there are several prophecies about the coming of the Messiah. In chapter 42, Isaiah begins with a prophecy for the coming of prophet Jesus. After verse number nine, God declares through Isaiah, the "new things" that are to "spring forth" in the Land of Kedar.

In the Bible there is only one personality called Kedar. He was the grandson of prophet Abraham, through his son Ishmael (see Gen.25:13). Kedar's descendants had settled in Paran (Syno-Arabian dessert). In the Rabbinic literature Arabia is called the "Land of Kedar". Prophet Muhammad was a descendant of Kedar.

"Behold, the former things are come to pass, and the new things do I declare: before they spring forth I tell you of them. `Sing unto the Lord a new song, and his praise from the end of the earth'. Let the wilderness and the cities thereof lift up their voices, the villages that Kedar doth inhabit: let the inhabitants of the rock sing, let them shout from the top of the mountains. Let them give glory unto the Lord, and declare His praise in the inlands." Chapter 42, Verses 9-12.

God did reveal in the Land of Kedar, through prophet Muhammad - a direct descendant of Kedar, a "New Song" - The Qur'an (Koran). This happens to be the only Scripture to be revealed in the language of the Kedarites. The verses of the Qur'an are recited like a poem. Nearly 1.2 billion Muslims, residing all over the world, recite this "new song" and Glorify Allah, in their daily prayers, five times in a day. The initial Revelation came to prophet Muhammad in a cave of Mount Hira near the city of Mecca. There are several mountains near Mecca. During the annual Islamic Pilgrimage called "Hajj", Muslims from all over the world, assemble in Mecca and shout Glory to the Lord from the top of Mount Arafat. The pilgrims continuously give Glory to Allah on their ways, to and from Mecca.

"The Lord shall go forth as a mighty man, he shall stir up jealousy like a man of war: he shall cry, yea, roar; he shall prevail against his enemies." Verse 13.

In the Old Testament the God often speaks "I" will do this, or "I" have done this; whereas, He has chosen human beings like us, to do these jobs. (see 2 Samuel 12:7-12). Muhammad did go forth as a mighty prophet of Allah, did stir up jealousy among the most influential and dominating tribe of the pagan Arabs in Arabia. Finally with a war cry and roar, Muhammad did prevail upon the enemies of Lord - the idolaters, fulfilling the above prophecy.

"I have long time holden my peace; I have been still, and refrained myself, now will I cry like a travailing woman; I will destroy and devour at once." Verse 14.

The prophets that came before Muhammad had all tried with peaceful missions. But, the concept of sharing God's Glory continued to surface again and again, in one way or other. It was with the war cry, through the descendants of Kedar (Arabs), these sinful practices were destroyed and devoured, inside and outside of Arabia. The spread of Islam was swift, wide spread and at once.

"And I will bring the blind by a way they knew not; I will lead them in paths that they have not known; I will make darkness light before them, and crooked things straight. These things I will do unto them, and not forsake them." Verse 16.

It is an undeniable fact that before the advent of Islam, the pagan Arabs were like the blinds. Their religious and social concepts were crooked. The revelation of this "new song" brought them out of that darkness. Earlier, God had not sent any prophet to these people. By sending Muhammad, God fulfilled His above promise and also the following promise to Abraham;

"And also of the son of the bondwoman I will make a nation, because he is thy seed." Genesis 21:13.

This also fulfils the following prophecy by Jesus;

"Howbeit when he, the Spirit of Truth, is come, he will guide you into all truth; for he shall not speak of himself; but what soever he shall hear, that shall he speak: and he will show you thing to come." John 16:13

For further details about "the Paraclete" and "the Spirit of Truth" please see Section 1 of this article.

"They shall be turned back, they shall be greatly ashamed, that trust in graven images; they say to the molten images, `Ye are our gods.'" Isaiah 42 Verse 17.

History records that Prophet Muhammad did put the pagan idolaters to great shame when he demolished before them, their 365 idols that were installed in Ka'bah (Mecca), the most respected place of pilgrimage in the whole of Arabia. Today, Ka'bah is the Grand Mosque of Islam. Muslims from all over the world face towards Ka'bah while reciting their daily ritual prayers. 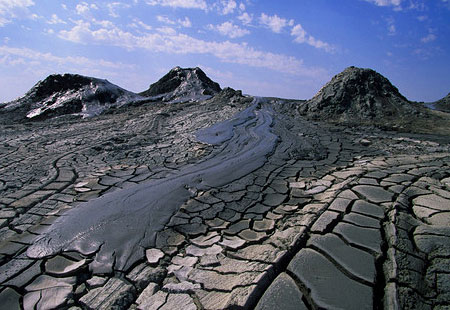