The Birth of Jesus and his Speech in Cradle

And, O Muhammad, relate in this Book the story of Mary: how she had retired in seclusion from her people to the eastern side and had hung down a screen to hide herself from them. There We sent to her Our Spirit ("an angel") and he appeared before her in the form of a perfect man. Mary cried out involuntarily, "I seek God's refuge from you, if you are a pious man." He replied, "I am a mere messenger from your Lord and have been sent to give you a pure son." Mary said, "How can I bear a son, when no man has touched me, and I am not an unchaste woman?" The angel replied, "So shall it be. Your Lord says, `This is an easy thing for Me to do, and We will do so in order to make that boy a Sign for the people and a blessing from Us, and this must happen." Accordingly, Mary conceived the child, and with it she went away to a distant place.

[When she conceived the child, she left the Sanctuary and went to a distant place (Bethlehem) in order to escape the bitter criticism of the people. They would have said, "Look at the virgin daughter of the pious house of Aaron ! She has conceived a child and that, too, in the Sanctuary where she had retired for devotion!" Thus she temporarily succeeded in concealing the shame of the conception, but this event itself is a proof that prophet Jesus was born without a father. Had Mary been married and had a husband, she would not have left his or her parents' house by herself and chosen a distant place for the purpose of delivery.]

Then the throes of childbirth urged her to take shelter under a date palm. There she began to cry, "Oh! would that I had died before this and sunk into oblivion. " At this the angel at the foot of her bed consoled her, saying, "Grieve not at all, for your Lord has set a spring under you; as for your food, shake the trunk of this tree and fresh, ripe dates will fall down for you; so eat and drink and refresh your eyes; and if you see a man, say to him, `As I have vowed to observe the fast (of silence) for the sake of the Merciful, I wi l l not speak to anyone today' . "

Then she brought the child to her people. They said, "O Mary! This is a heinous sin that you have committed. O sister of Aaron! your father was not a wicked man, nor was your mother an unchaste woman. "

["Sister of Aaron" may either mean that Mary had a brother of the name of Aaron, or it may mean that she belonged to the family of Prophet Aaron. The first meaning is supported by a tradition of the Holy Prophet and the second is plausible because that is supported by the Arabic idiom. But we are inclined to the second meaning, for the wording of the said tradition does not necessarily mean that she actually had a brother named Aaron. The tradition as related in Muslim, Nasa'i, Tirmizi, etc. says that when the Christians of Najran criticised the Quranic version of stating Mary as the sister of Aaron before Hadrat Mughirah bin Shu`bah, he was not able to satisfy them, because Prophet Aaron had passed away centuries earlier. When he presented the problem before the Holy Prophet, he replied, "Why didn't you say that the Israelites named their children after their Prophets and other pious men?" That is, "You could have answered their objection like this as well."  ]

(In answer to this) Mary merely pointed towards the infant. The people said, "How shall we talk with him, who is but an infant in the cradle" ?

[This speech in the cradle by Jesus was the `Sign' to which the angel referred in verse 21. As Allah intended to punish the children of Israel for their continuous wicked ways and evil deeds, He made a pious virgin girl of the family of Prophet Aaron, who had devoted herself to worship in the Temple under the patronage of Zachariah, bear a child and bring it before her people in order to concentrate the whole attention of the thousands of people assembled there on this extraordinary event. Then He made this new born child speak out even in the cradle that he had been appointed a Prophet. Though they had seen this wonderful Sign of Allah, they rejected the Prophethood of Jesus and brought him to the court for crucifixion, and thus incurred the wrath of Allah.]

This is Jesus, the son of Mary, and this is the truth about him concerning which they are in doubt. It does not behove God to beget a son for He is far above this. When He decrees a thing, He only says, "Be", and it does come into being.' (And Jesus had declared) "Allah is my Lord and your Lord, so worship Him; this is the Right Way. " But in spite of this, the sects began to have differences among themselves. So those who adopted the ways of disbelief shall suffer a horrible woe, when they witness the Great Day. On that Day when they shall appear before Us, their ears and their eyes shall become very sharp, but today these transgressors (neither hear nor see the Truth and) have strayed into manifest deviation.

(O Muhammad), now that these people are not paying heed and are not believing, warn them of the horrors of the Day, when judgment shall be passed, and they will have nothing left for them but vain regret. Ultimately, We will inherit the Earth and all that is on it, and everyone shall be returned to Us. (The Holy Quran, 19:16-40 with explanation from Tafheemul Quran) 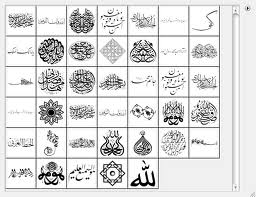